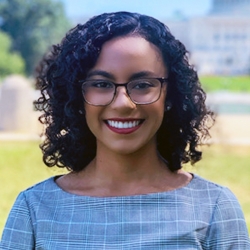 Email: This email address is being protected from spambots. You need JavaScript enabled to view it.
Phone: 915.491.9546

Born and raised in El Paso, Texas Brenda grew up primarily focused on her studies. She was not initially exposed to the outdoors until her early teen years through school field trips to the Carlsbad Caverns National Monument, White Sands National Monument, Guadalupe Mountains National Park, and other several family vacations to Mexico. Her interest in science grew through failing a 9th grade biology class which pushed her to understand the subject and grew to love it.

In 2010, Brenda Gallegos graduated with an Associate’s Degree of Arts in Science before graduating high school in May of 2011. She continued her education at the University of Texas at El Paso and graduated with a Bachelor’s of Biological Sciences focused in Ecology and Evolutionary Theory. She attended Sul Ross State University in 2013 and graduated with a Master’s of Science Degree in Range and Wildlife Management where she focused on scaled quail diets in the Chihuahuan Desert. Brenda began working with New Mexico Specialized Wildlife Services in New Mexico as a wildlife biologist researching on the Montezuma quail in northern Mexico and southern New Mexico. She learned about Friends of the Organ Mountains-Desert Peaks through her work and joined the organization as a Tribal VISTA, later on becoming the Associate Director after finishing her one year service work. Working on several conservation issues from the Land and Water Conservation Fund to the ANTIQUITIES Act of 2019. Also working on introducing the outdoors to underprivileged youth in the surrounding area through establishing an outdoors club at a local high school and outdoor summer programs with local organizations. After 3 years working with Friends of the Organ Mountains-Desert Peaks, she has joined Hispanic Access Foundation to continue her passion in conservation. Public lands sparked Brends’s passion in wildlife, the outdoors, and learning about protecting these beautiful unique landscapes.

Scholarship Opportunity🚨: Applications are open for #OurDREAMSScholarship! If you’re an #undocumentedyouth living i… https://t.co/iDuH8XSpRL
From Twitter Web App

RT @savebearsears: Thank you Madame @SecDebHaaland for meeting with Tribal leaders and Coalition representatives of the Ute Mountain Ute Tr…
From Buffer