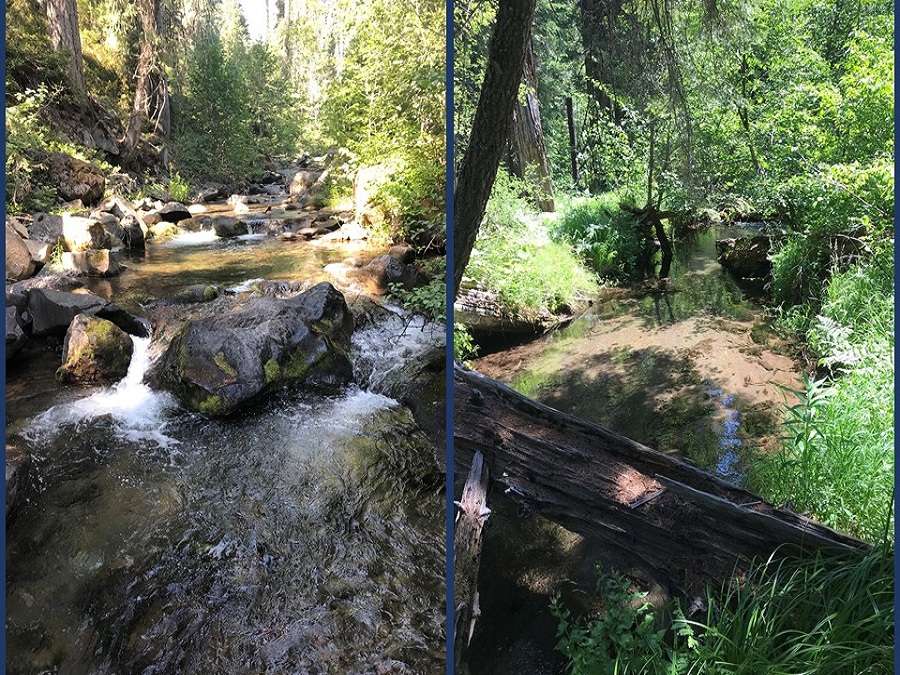 Experiencing the USFWS Mission in the Field


I can’t believe this summer is nearly over! This month, I traveled from my home in Mississippi, where I’ve been working remotely, to our office in Klamath Falls, Oregon for a week to participate in fieldwork and see the streams I’ve been writing about up close.  The original plan was to remove brook trout (a non-native species threatening native bull trout) from several streams using backpack electrofishing, but nature had other plans.  A forest fire blazed through Fremont National Forest, including the streams we intended to sample.  As I’m writing this blog, the fire is still burning, and has covered over 400,00 acres including all of the bull trout occupied streams on the east side of the Klamath basin.  While the impacts of this fire will surely be felt for years to come, bull trout populations are still going strong on the west side of the basin.

Because the fire shifted our fieldwork plans, I got to help with other USFWS field projects. I spent two glorious days surveying for western ridged mussels in the crystal clear waters of the Sprague River. There isn’t much information available for where this mussel species lives, so it was really cool to be able to document part of their distribution.  I also got to help collect two endangered species of suckers that were being held in a net pen in a nearby reservoir to be stocked into Upper Klamath Lake.  The suckers had been stocked in the net pen earlier this spring so that they could grow larger and increase their likelihood for surviving their eventual release into the lake.  We spent the final two days visiting stream rehabilitation projects and conducting site visits to several of the streams that are candidates for bull trout reintroduction.  The headwaters of these streams begin in the Cascade Mountains, which lie to the west of the basin, and flow down into the valley below.  As the streams cross different elevations, the habitat and appearance of the streams change from cold, swift, boulder-strewn streams to calmer water with fallen trees and undercut banks ideal for hiding small fish (see pictures above).  Both types of habitat were beautiful to see in person, especially after spending two months describing how bull trout use these habitats to spawn or forage.

Being able to help out with multiple projects has really helped me to see the breadth of the focus of USFWS. The work with multiple listed species (bull trout, western ridged mussels, suckers) all intersected with ecosystem restoration efforts that were installed to benefit both the landowners and the species at risk. At the heart of all of the projects I helped with, the focus was still on working with others to accomplish conservation. I am so grateful that I had the opportunity this summer to fully understand the mission of the Service: “working with others to conserve, protect, and enhance fish, wildlife, plants, and their habitats for the continuing benefit of the American people.”

RT @NPSYouth: ⭐️ On this last day of #HispanicHeritageMonth, meet Alisson, who is currently a @HispanicAccess Fellow working in the @RTCANP…
From Twitter for iPhone

RT @GeorgiaAudubon: On this final day of Hispanic Heritage Month, we encourage you to follow the @HispanicAccess Foundation! This organizat…
From Twitter for iPhone

RT @maitearcedc: Congratulations! As a mother & daughter of a very brave mother, this film meant so much to me. @whatfandoes
Follow Hispanic Access Foundation on Twitter