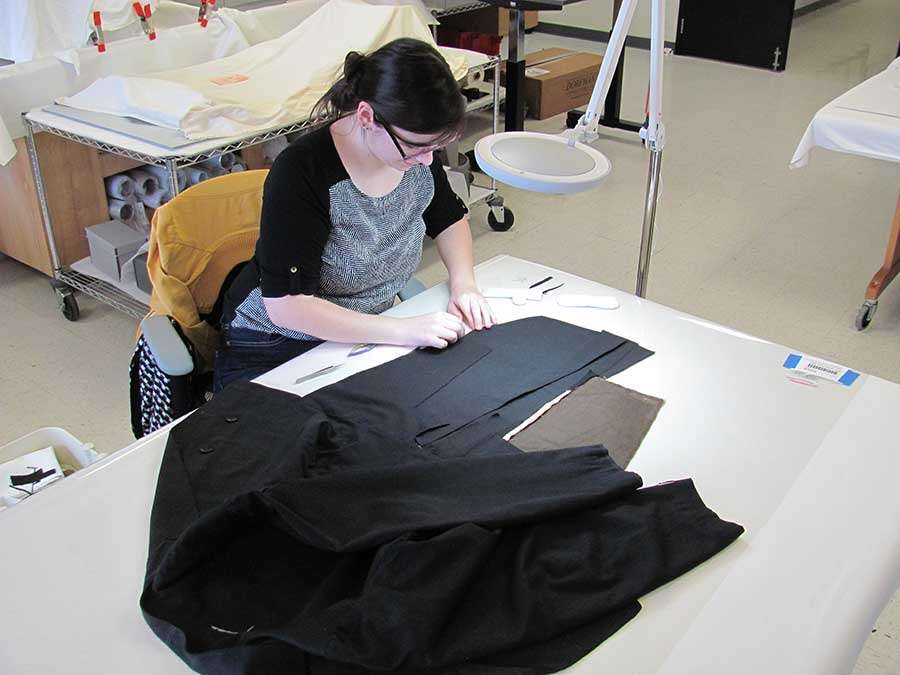 On the night of April 14, 1865, tragedy struck the nation as John Wilkes Booth assassinated President Abraham Lincoln. Many books and dissertations have been written about those two figures and that night. But this post isn’t about them. This post is about another man present in the theatre that night. William Withers, Jr. was the orchestra conductor at Ford’s Theatre. He was backstage when he heard what sounded like a gunshot. He didn’t recall any gunshots being in Our American Cousin but didn’t have much time to wonder before a man ran towards him from the stage.

Withers stood “paralyzed” between Booth and his only exit. His court testimony recounts:

I did not know what was the matter; he hit me on the leg, turned me round, and made two cuts at me, one on the neck and one on the side, as he went past me I said that is Wilkes Booth; with that he made a rush for the door, and out he went; just then I heard the cry that the President was killed, and I saw him in the box, apparently dead.

The cuts Booth made at Withers luckily resulted in only his formal tailcoat being torn. It is this tailcoat that has occupied my time over this spring and summer with Harpers Ferry Center’s Museum Conservation Services.

This coat had not received any conservation treatment prior to its arrival at the conservation labs. Beyond the two or three historic tears, the coat’s silk lining was deteriorating, some seams were splitting, and its tails had been mostly cut away and presumably given or sold as souvenirs in the decades after the assassination, as Withers was quite the showman, and capitalized on the fame this brush with Booth afforded him. It was not recognizable as a tailcoat. I was set to task stabilizing this damage and preparing the coat for future exhibition at Ford’s Theatre. 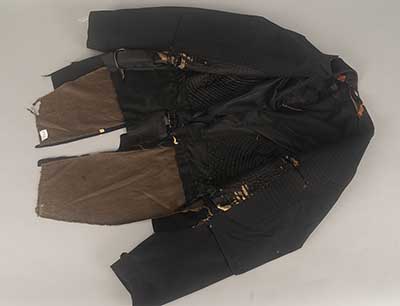 After a careful and gentle vacuuming, and research into the events of that night, I tackled the historic damage on the coat. Two tears of the backside near the neck and shoulder, and one similar tear at the cuff (though this last tear was not corroborated in any historic text I could find, it is better to err on the side of caution) were given a light grey cotton underlay (or patch) sewn to the interior of the wool of the coat with surgical needle and hair-like thread. The underlays will help ensure the tears don’t grow over time and the contrasting color makes them visible so the coat’s story can still be told.

The delicate silk lining came next. Silk, especially black silk, due to the dyes used, becomes extremely brittle and tends to shatter as it ages. This I encapsulated, covered, in black Stabiltex, a fine polyester mesh material, which was sewn to the stronger wool of the coat to help protect it from any further damage and secure what was left inside the coat.

Next came the tails. Only the interior pockets and some scraps of seams hinted at their original construction. I managed to find a photograph of the coat published in 1904 which showed one tail almost fully intact. From this photograph and other similar tailcoats held in museum collections, I was able to recreate the approximate length and curvature of the original tails. I dyed the lightweight silk and wool chosen for the reconstruction an almost matching black. Black enough to give visual continuity to the coat, but different enough to easily tell the difference between my additions and the original fabric. A polyester interfacing was inserted to give the tails enough body to hang from the mannequin appropriately. 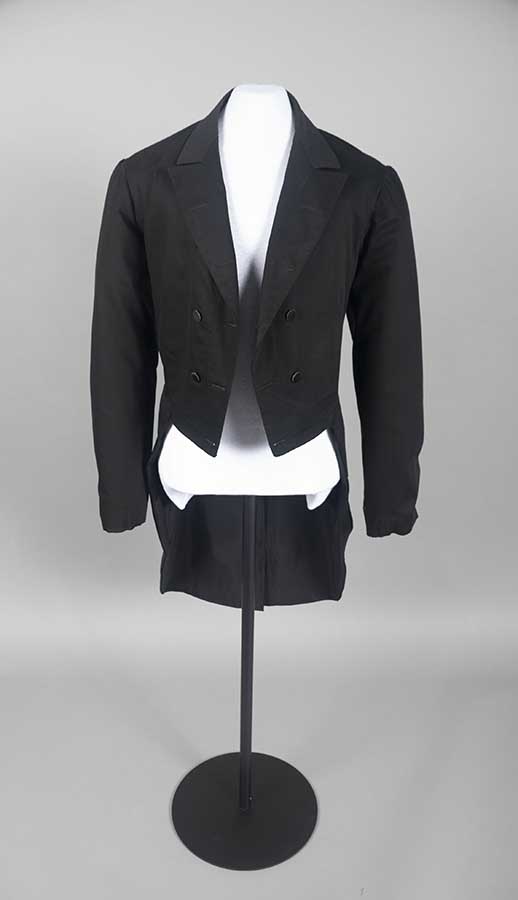 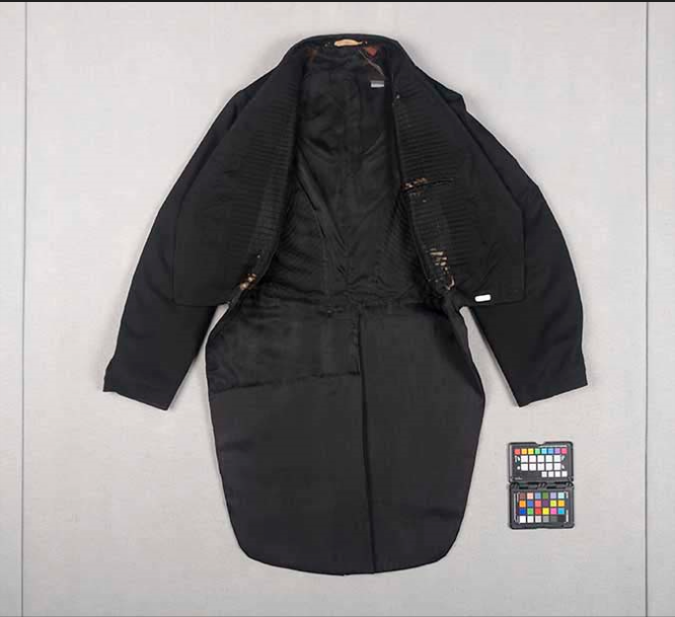 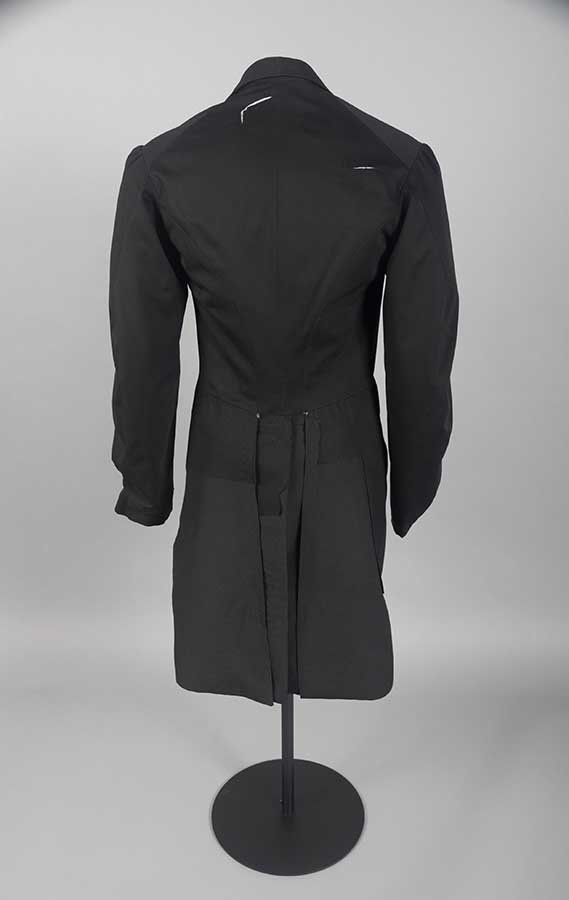 The mannequin was customized to perfectly the coat’s dimensions. The rear was extended using Fosshape and polyester batting to give proper support for the tails and the back was built up with polyester batting to give the coat a proper fit through the shoulders. I also constructed a new archival storage box to fit the coat’s new extended size and soft Tyvek pillows for arms (display and storage) and a torso pillow for storage.

This project was extensive and tested my abilities to pattern and trust myself through long processes. I learned so much from my supervisor, NPS textile conservator Anne Ennes. I am grateful to her guidance and trust she placed in me in giving me this project.