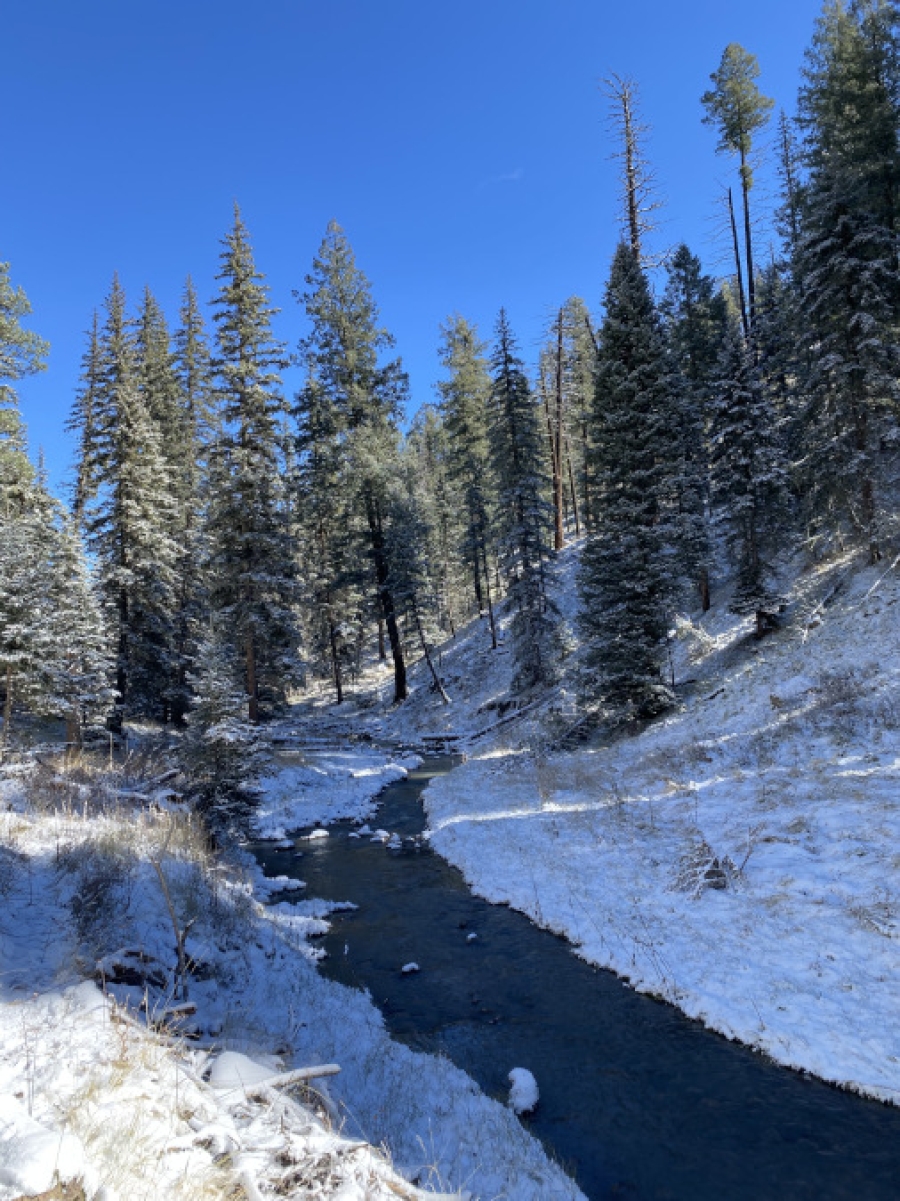 The days may be shorter and colder, but field work must continue. I recently had the opportunity to work with several partners such as New Mexico Department of Game and Fish, San Francisco Soil and Water Conservation District, National Fish and Wildlife Foundation, Trout Unlimited, New Mexico Environment Department, and New Mexico State University on an aquatic habitat restoration project. This restoration project is at the Willow Creek watershed in the beautiful Gila national forest. This project has been several years in the making and will continue. The focus of this several day portion of the project involved work in Little Turkey Creek where primitive techniques were implemented to reduce erosion, stabilize banks, and reduce channel head cutting which will help improve stream and riparian conditions.

The drive to the Willow Creek area is a few hours away from the office I sit at and is on a relatively rugged road through beautiful mixed-conifer country where aspen, fir, and spruce species thrive. To access the road, we had to go through the town of Mogollon which is a historic mining town rich with history. Mine shafts can be seen along the road. We had our first snow of the season the night before and we were the first people to drive on the road after the snow, so it was a stunning drive. We found Mexican gray wolf tracks on the road which was incredible to see. This species is recognized as endangered and have been reintroduced to the area. We also saw bobcat tracks in the snow.

Once at the Willow Creek campground, we began our hike into Little Turkey Creek which lies in the Gila Wilderness. Since this portion of the project fell within wilderness boundary, primitive techniques and natural materials were used. Mules were used to pack in some of the equipment and our lunches. Over the course of several days, two Zuni bowls were constructed in the stream, which are rock features built into the streambed that mimic a natural riffle and pool formation while also armoring the channel to help minimize erosion. A total of twenty-six one rock dams were also constructed which help slow streamflow and improve water absorption into the soil. In turn, this will help maintain wetlands and trap plant seeds and seedlings to help them grow. Over five hundred willow stems were cut and stripped of branches and were planted throughout the drainage to help with steep cutbanks and water flow. Some people were tasked with cutting willows, others with finding and rolling large rocks for the Zuni bowls and one-rock dams.

These efforts are intended to restore the stream to a healthy channel, improve aquatic habitat, and restore wetlands. This area is considered a Special Trout Water by the State of New Mexico because it is Gila trout habitat which is a federally endangered species. Overall, this day was incredible to see partnerships occurring in areas as special as this. It was a winter wonderland with a fresh blanket of snow. Days like this feel so great to participate in and I am thankful to be a part of an agency where days in the office can look like this.