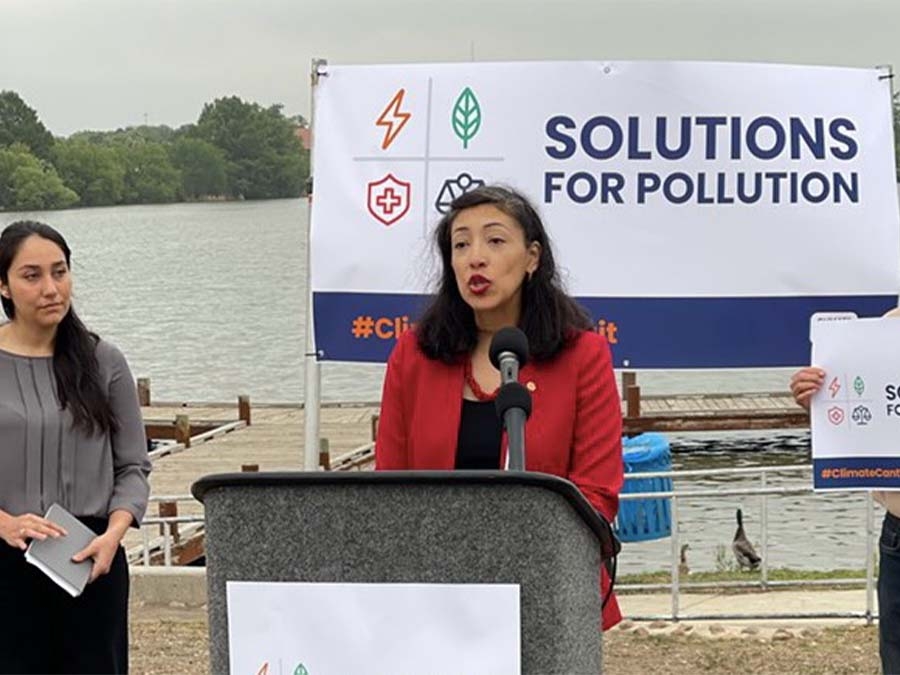 The day before Earth Day, a small contingent of environmentalists and public health advocates called on the federal government to enact stricter regulations on CPS Energy’s Spruce coal plant.

Sandoval was joined by Chantelle Ruidant-Hansen of the Hispanic Access Foundation, and Adelita Cantu, an associate professor of nursing at UT Health, at Woodlawn Lake Park Thursday to urge the EPA to “make good on [its] promise” to take action against fossil fuel plants and help protect public health “by investing in clean energy to fully transition away from fossil fuels.”

The group noted that earlier this month, the EPA announced the San Antonio region could soon face stricter federal air quality regulations due to its inability to reduce air pollution and meet federal ozone standards.

Sandoval also called on CPS Energy to shutter Spruce “as soon as possible” given its status as one of the area’s largest single-point sources of carbon dioxide.

Spruce, a two-unit facility located on Calaveras Lake in south Bexar County, was one of the last coal-burning power plants to be built in the U.S. In 2020, Spruce emitted almost 6 million tons of carbon dioxide into the atmosphere, according to the U.S. Energy Administration. Carbon dioxide is one of the leading causes of global climate change, as it traps heat in the atmosphere.

The coal plants emit a range of pollutants as well, including mercury, sulfur dioxide, and the ozone-forming pollutant nitrogen oxide, that not only contribute to a warming planet, but can also harm residents’ health, said Cantu, an associate professor of nursing at UT Health.

Ozone is a key ingredient of smog, which irritates and damages the lungs and has been tied to chronic conditions such as asthma. U.S. Energy Administration estimated that Spruce produced roughly 2,300 tons of nitrogen oxide in 2020.

Ahead of Earth Day and following the EPA’s proposal to change San Antonio’s ozone nonattainment status from marginal to moderate, now is the time to focus on climate change locally as well, Sandoval said. Climate change is “no longer a hypothetical scenario,” she said.

And while the city of San Antonio is committed to its ambitious Climate Action Adaptation Plan, “we also need the full partnership of the federal authorities whose job it is to establish safeguards to reduce harmful pollutants,” she said.

While CPS Energy has committed to close Spruce 1 by 2030, it will likely convert Spruce 2 to a natural gas plant by 2027, a move most local environmentalists oppose because natural gas still produces harmful emissions.

The utility is currently in the process of selecting partners to add up to 900 megawatts of solar resources, 50 megawatts of energy storage and 500 megawatts of “reliable capacity” — more than likely, additional natural gas.

CPS Energy officials told the San Antonio Report Thursday that it is “committed to environmental responsibility while providing reliable and affordable” services to the San Antonio region.

“We have made several upgrades to our power plants to reduce air emissions and as new regulations are proposed, we will analyze and engage with our community on the best path forward,” said CPS Energy spokesman Ruben Betancourt.