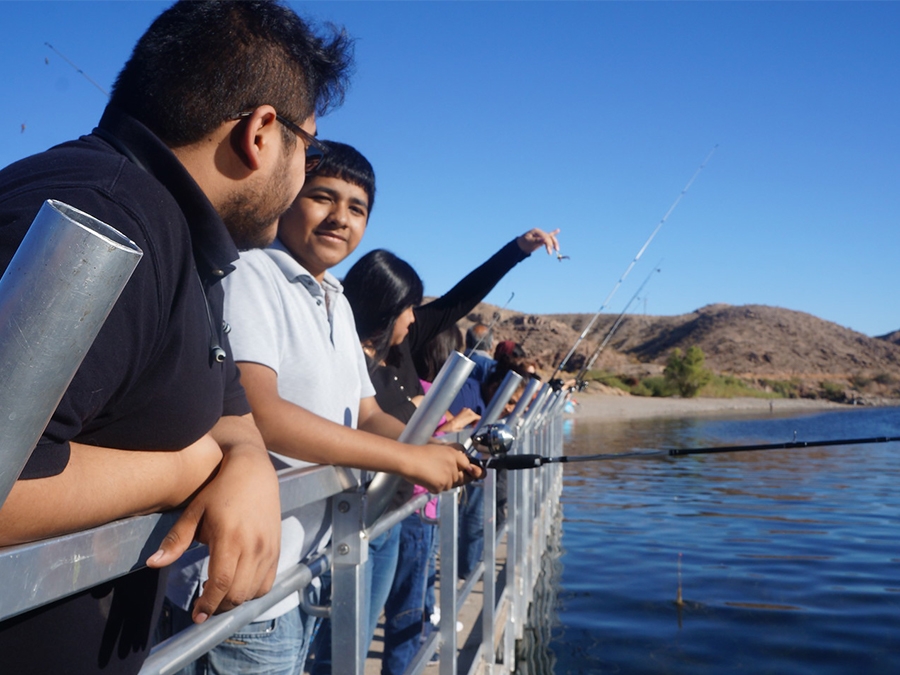 More than 50 Las Vegas-area youth and families from Centro de Adoracion Familiar Church and supporters of Chispa Nevada took to rods and reels on Oct. 26 with a hands-on fishing lesson from the Nevada Department of Wildlife on the beaches of Lake Mead National Recreation Area.

“Getting kids outdoors and in touch with nature is critical today when it seems like our lives are driven by smartphones,” said Pastor Juan Almaza with Centro de Adoracion Familiar. “We all share the moral responsibility of serving as stewards for our public lands and waterways, and there is nothing better than an active, first-hand experience to prepare our youth for that role.”

Latinos make up nearly 28 percent of Nevada’s largest ethnic population, yet only a fraction of the state’s anglers are Latino – the U.S. Fish and Wildlife estimates that only about 9 percent of the nation’s Latinos fish. Events like this one at Lake Mead look to provide a strong conservation initiative balanced with the cultural and economic needs of 21st century life. Additionally, the event not only helps introduce the wonders of the natural environment, which for many is just a short drive away, but it also teaches the youth how to respect and protect what they will come to enjoy so much. The event also underscored how important the Land and Water Conservation Fund (LWCF) is to providing Latinos with access to the outdoors.

“LWCF funded sites are everywhere – from local community parks, pools and trails to some of our greatest national parks, forests and Refuges. Lake Mead, like more than 42,000 other sites nationwide, has received financial support through LWCF, which supports the development, expansion and maintenance of these sites and ultimately makes these locations accessible,” said Maite Arce, President and CEO of Hispanic Access Foundation. “Failing to keep LWCF’s funding healthy jeopardizes the long-term access to these sites for Latinos and other communities.”

While LWCF doesn’t cost taxpayers since its funded through offshore oil and gas royalties, its annual allocation, which is capped at $900 million, must be authorized by Congress, which has fully-funded LWCF only once in its 54-year history. While Hispanic Access Foundation and other groups are advocating for permanent full funding of LWCF, there is optimism that fiscal year 2020 will have at least $524 million allocated by the House and that the Senate will either match that or set the bar even higher, especially since there was overwhelming bi-partisan support for permanent reauthorization of LWCF in both chambers earlier this year.

RT @HispanicAccess: Looking for an internship with the US Fish and Wildlife Service? Look no further and visit our website TODAY to apply 🗣…

RT @HispanicAccess: Looking for an internship with the US Fish and Wildlife Service? Look no further and visit our website TODAY to apply 🗣…