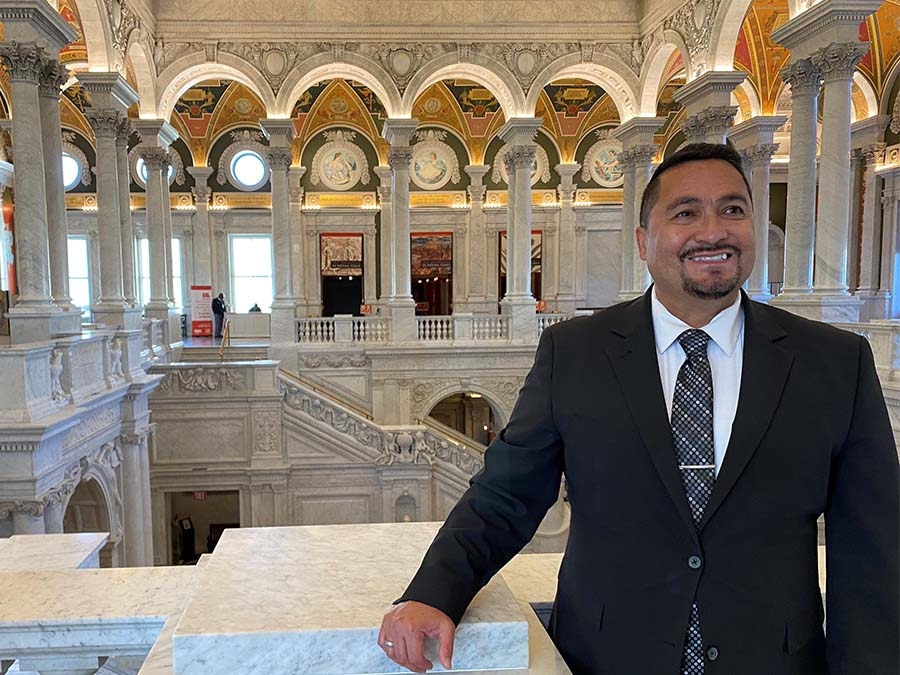 Roberto Salazar: The Value of Networking and Working for a Cause

Roberto Salazar grew up in Las Vegas, New Mexico, a small town that is predominantly populated by Latinos, and home to New Mexico Highlands University, where Salazar received his Bachelor of Arts in Management and Finance.

At 15 years old, Salazar traveled to Washington, DC to form part of the United States Senate Page, which exposed him to a career in public service. This was the first of many doors that opened for him.

“It really opened my eyes to what life was like away from a small town,” said Salazar. “I was not seeing a lot of people that looked like me in positions of power, and I thought to myself, ‘I want to be here one day’.”

After completing his undergraduate degree, Salazar moved to Washington, DC to work for the United States Department of Commerce where he oversaw the minority business development agency, an agency dedicated to supporting minority owned businesses across the country; however, Salazar’s drive to strengthen his expertise led him back to New Mexico, to graduate with a master’s degree in psychology.

During his last semester of graduate school, a new governor was elected, and the governor’s new chief of staff was Luke Gallegos, a previous mentor of Salazar. Gallegos offered Salazar a position as the Director of New Mexico’s Human Services Agency, where Salazar was appointed to administer public assistance programs such as Supplemental Nutrition Assistance Program (SNAP) and Special Supplemental Nutrition Program for Women, Infants, and Children (WIC). Knowing his position was going to end when the governor’s term ended, he began looking for other opportunities to support underserved communities.

“If it’s a 4-year term and you start at the beginning of the term, you have at most 3 years to make your mark because you don’t know if the person is going to be reelected,” said Salazar. “I attribute that drive of leaving your mark, and building your narrative, to my cultural upbringing as a Latino.”

One day, Salazar received a call that shifted the direction of his career. He was recruited to be the Executive Director of Self-Reliance Foundation in Santa Fe, New Mexico, where he met Maite Arce, the program director of Acceso Hispano. Salazar’s experience and leadership relocated the Self Reliance Foundation to Washington, DC. Even though he refused to leave his home in New Mexico, he was soon recruited by the White House.

Salazar became the Administrator of Food and Nutrition Services for George W. Bush’s administration. He recalls former president Bush saying, “I want you to make sure everybody who is eligible to participate in these food programs does.” So, Salazar conducted a study and found that Latinos did not participate in federal assistance programs due to a lack of access and awareness.

“There’s situations where there might have been family members that were undocumented and others who were documented,” said Salazar. “There was this belief that ‘If I apply for federal aid, I’m going to put my family at risk’ or ‘if I apply for benefits for my children who are citizens, I’m going to put myself at risk because I am not a citizen’.”

Though his term as the Administrator of Food and Nutrition Services ended, the knowledge he gained taught him the importance of increasing program accessibility to educate and support diverse communities. Already in DC, Salazar returned to the Self-Reliance Foundation and continued working with Maite Arce.

The foundation developed international programs in Venezuela and Cuba, and focused on receiving funding from the state department, but due to an incident involving another nonprofit organization, Self-Reliance Foundation’s funding plummeted.

“Maite Arce realized that the work she was doing with Acceso Hispano was valuable and very wisely she said, ‘we need to start another organization’, and created what is now, Hispanic Access Foundation,” said Salazar. “She asked me to serve as the chairman of the board.”

In addition to his role as the chair of the board of directors for Hispanic Access Foundation, Salazar began doing consulting work for the Library of Congress until they realized they had a permanent need for his consulting services. Now, he is the Chief Operating Officer for Collections and Services at The Library of Congress.

Salazar’s networking and relationship building shaped his career in government and non-profit organizations, but his commitment to underserved populations stems from his Latino roots, and a set of guiding principles.

“We have to do a better job at connecting our community to what is available for them.”

Hispanic Access is inspiring, training, and supporting local leaders like Roberto Salazar, who have a stake in their community and have the drive for positive change. To help support and continue this work, please consider making a Charitable Donation

Do you have your ticket for #OurHeritageOurPlanetFilmWeek yet? Don’t miss out on an AMAZING week of learning, exper… https://t.co/er5sKLxHTh
From Twitter for iPhone

Today is our director of development Luke’s birthday and his birthday wish is for everyone to buy our limited editi… https://t.co/VHGjUFQHkM
From Buffer