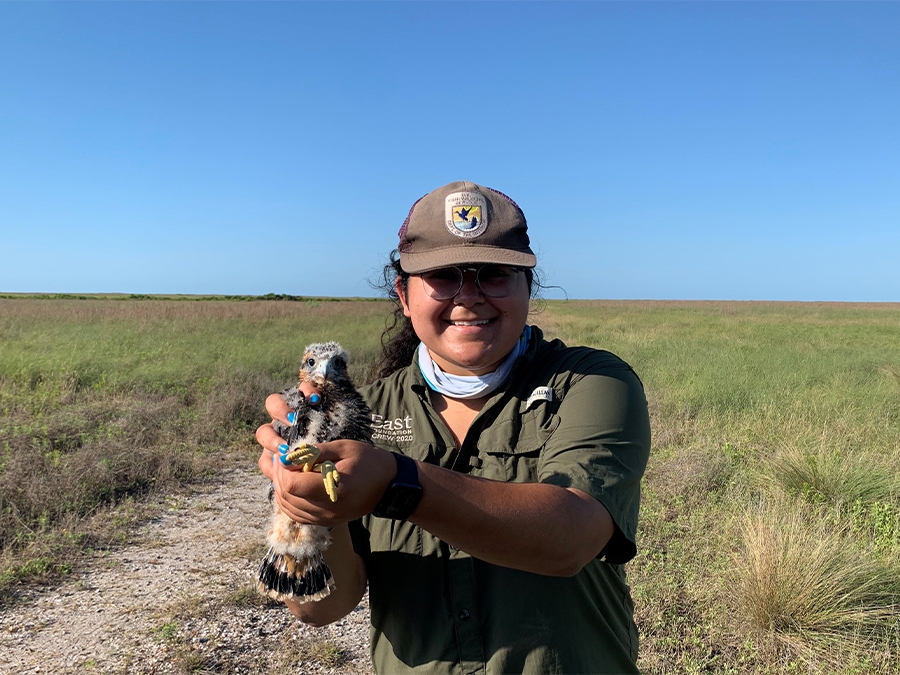 When Ashley was just a child, she and her family used to go to the beach in Corpus Christi to watch the power of the sea. She loved the ocean so deeply that she thought she should study marine biology.

However, years later, she was also captivated by migratory birds; she wanted to know more about their physiology and their ways of adapting to different conditions. She was in awe of wildlife in general. Now, Ashley is one of the 6 fellows that spread across different National Wildlife Refuges. She and her peers are part of the Civilian Climate Corp (CCC), a program sponsored by the Fish and Wildlife Service and Hispanic Access Foundation.

Every day Ashley works from her cubicle, located in the magnificent Aransas National Wildlife Refuge, and she combs through different literature that could help her understand the vulnerabilities of the refuge habitats, and the future changes those ecosystems will face in the short and long term. The results of her research could help adapt Aransas habitats to climate change, while also contributing to the preservation of endangered species that inhabit in the region, such as the Whooping Crane, and a big list of birds that flee the frigid winters to enjoy the diversity and warmth of the Texas Gulf Coast.

“We are not just driving the car, but also making it,” says Ashley, referring to the pilot project in which she and her CCC colleagues are involved, that seeks to create a climate vulnerability and risk assessment for different national wildlife refuges. In addition to the research she supports, Ashley has experienced different activities that are part of the daily work of the refuge, ranging from observing management through mowing, helping with vegetation surveys and analyzing sea elevation. “I’ve been able to hold an endangered whooping crane and an aplomado falcon to take some samples from them, and I’ve even gotten certified on boat handling. That’s all excitingly new to me”, she explains.

At only 23 years old, Ashley is a Gen Zer who believes in the power of social media. At the same time, was born and raised in the south of Texas, in a small town of about a thousand people called Benavides. Her childhood home was small and surrounded primarily by ranches. It was only to be expected that she would develop a fascination with wildlife in general. “I remember one time when the Texas Parks and Wildlife Department was explaining to us how soil classification worked and then having another station where they had dead deer to show us the anatomy. I was the only one, among my friends, who wasn’t grossed out. I was so fascinated by all the different organs and being able to experience that”, she confessed.

Ashley graduated from her college a year ago, but she recalls that her path wasn’t so clear at first. In her first year of her studies, Ashley had a hard time deciding between animal science or wildlife studies. After going back and forth, she finally settled on the Range and Wildlife Management program at A&M University Kingsville in Texas.

After working as a Wildlife Technician in the East Foundation, and working in various other positions and organizations, Ashley returned to the same place where her dreams began: the ocean. Now, viewing it from the Aransas National Wildlife Refuge, she already knows what her next step will be: studying coastal science and, of course, continuing to work to preserve the natural world and adapt it to climate change.

“I want my children and grandchildren to enjoy the beauties of the natural world. I don’t want them to find those places completely destroyed. We must work and fight to protect the place in which we live.”

Hispanic Access is inspiring, training, and working with leaders like Ashley García, who have a stake in their community and have the drive for positive change. To help support and continue this work, please consider making a Charitable Donation