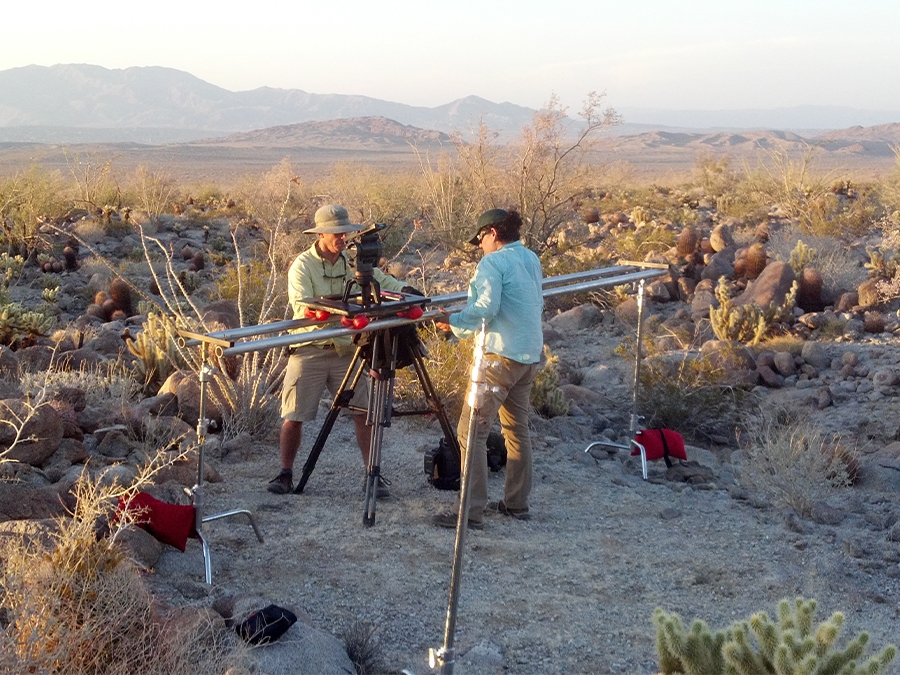 The first time that Mac Cardona met a wildlife biologist she was totally amazed, she couldn’t believe that someone could study cheetahs, and make a living that way.

Years later, as a graduate student, and someone with a broader knowledge of the scientific community, Mac realized how disconnected that community was from the general public, especially the Latino community. So, she made a decision. Despite possible criticism from her fellow scientists, and despite her fear of embarking down an unusual path, Mac resolved to become a science storyteller.

It all sounds clear now, but over a decade ago, when Mac began her career as a wildlife biologist at Humboldt State University, now Cal Poly Humboldt, she still didn’t know what the missing piece of the puzzle was.

“I knew I wanted to work with animals, but I didn’t know how."

Naturally, Mac gravitated toward animal science. In the meantime, she was influenced by her parents, and by the unique ways they looked at the world. Her mother, a restless artist, was always at home creating something new: a costume, a piece of jewelry, a painting, a poem. While her father, a librarian, would bring her different kinds of books to read.

“For me it was natural, that way of thinking: If you want to express yourself artistically in a certain way? Just do it. You don't lose anything by trying."

Yet, it didn’t occur to Mac to make a film as her final project for graduate school. Her adviser had been awarded a grant to do a film project, and he asked her to be part of it. That was the first time Mac thought of science storytelling.

“I thought: wait, what? I can do this? I didn’t have any examples of people like me making these types of films. Also: where would I stand with the scientific community if I were to go forward with storytelling?” she thought, at that moment.

Over time, all Mac’s fears vanished, and she decided to not only work with her adviser on his project, but also to focus her Master’s work in Biology and Natural History Film.

Mac Cardona is a restless professional, like her mother. Now, she is part of the advisory council for Jackson Wild. She is also a member of the Latino Climate Council (LCC), an initiative of Hispanic Access Foundation; and the founder and CEO of cWave Labs, an organization she created five years ago to enhance engagement with communities, especially Latino communities. Recently, she proposed the creation of a storytelling committee in the LCC.

“Latino communities talking about science through film - It’s my favorite intersection,” she says.

“My family is very much a rainbow of colors,” Mac explains. She is a second-generation Mexican-American, who grew up in California. “I’m Mexican, but with European roots and Indigenous ancestors. That is what it means to be Latino: to have a mixture of all those cultures.” California is one of the states in the US where the majority of people are Latino. This doesn’t imply that California is more inclusive, especially in the cinematographic industry, which is one of the topics Mac is really passionate about.

“We aren’t even half of those. Basically half the city of Los Angeles is already Latino. If most of the movies were made in Hollywood, they would have to have been working really hard to not cross paths with us.”

To change the level of representation of the Latino population in films, and to try to connect people with nature, are now two of Mac’s goals. She thinks that, through fiction and storytelling, both of these are possible.

“Fiction can be a very powerful tool to try to reach new audiences. We can have Latino characters playing roles of scientists or researchers. We can be discussing climate change and its possible solutions, but in ways that entertain people and could make a change."

At the end of the day, what Mac really wants to do is to make a difference, using storytelling. To achieve this, she will continue to create and to imagine bridges between nature, science, and Latino communities. After all, nothing is lost by trying.

Hispanic Access is inspiring, training, and working with leaders like Mac Cardona, who have a stake in their community and have the drive for positive change. To help support and continue this work, please consider making a Charitable Donation