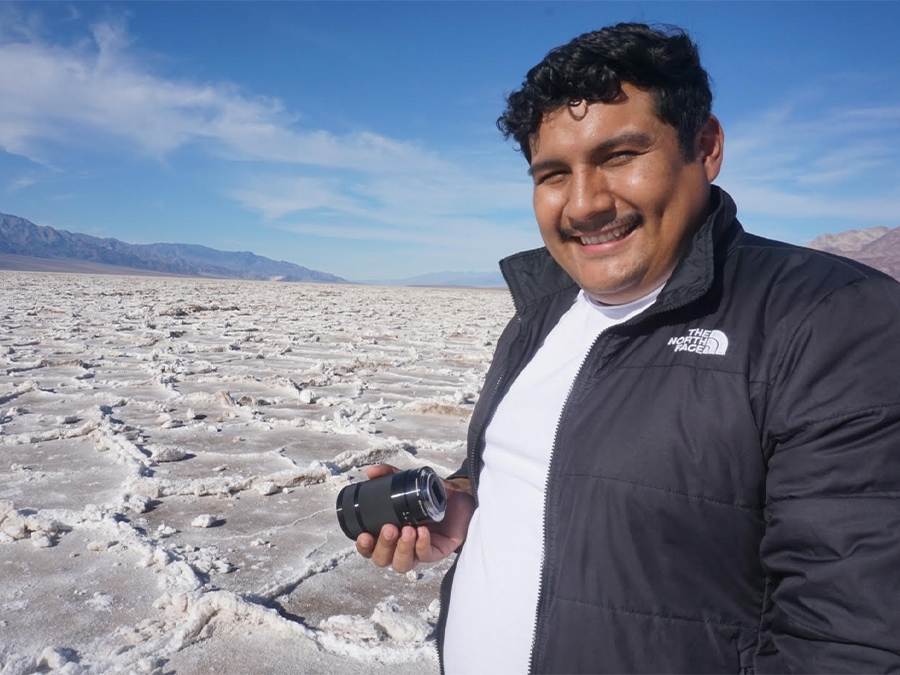 Fernando has always found it difficult to explain his work: “I take geospatial data and make maps, or, in other words: I make maps to visualize data on fauna and endangered plants."

It sounds simple but with that tool, he and his team have been able to increase the conservation zone of the Santa Cruz long-toed salamander habitat. They indicated which parcels of land would be suitable for creating new protected zones, and thanks to that visualization his organization got a $5 million grant to acquire that land.

Fernando is a geographer, and a recent member of the U.S. Fish and Wildlife Service (FWS) in Ventura, California. He was named as a permanent employee after being an intern through the MANO Project of Hispanic Access Foundation, a program that connects Latino leaders who share a passion for conservation, to opportunities in the field.

Mapping was something that came quite naturally to Fernando. He had a reputation within his family for being good with technology. Maybe because he spent hours editing videos of his outdoors adventures, or figuring out new places on Google Maps for his next excursion. There’s no doubt he was good with computers, but it was his father who finally made him fall in love with maps.

It all began in 2008. Fernando’s dad started working as a truck driver and immediately ran into a problem: the truck he was driving had no GPS technology to guide him along the routes of the US. So, the only solution he saw was Fernando. He, who was just a teenager at the time, would be the go-to GPS, who would guide Fernando’s father along routes from his phone.

“I gave him a 10-10 navigation via live streaming. Meanwhile, I looked at the map I had on my computer,” Fernando remembers.

Fernando was born in Los Angeles. He is a first-generation Latino, the oldest of four siblings, and the first in his family to have a professional degree. For him, geography came a little late to his life. Before, Fernando tried to major in Engineering, then Business Administration, but none of those programs excited Fernando. He felt miserable. It was his girlfriend who brought him out of his slump, and said, “I see that you love to be on Google Maps, so why don’t you try switching your major to geography?”

Her words clicked in Fernando’s mind. Suddenly, everything made sense.

Ultimately, Fernando received a Bachelor’s degree in Geography from California State University Long Beach, and it was his love for the outdoors that inspired him to approach Hispanic Access Foundation, and apply to one of the MANO internships.

“I found MANO on Instagram. I have a page where I share my adventures in the forest, and I think the algorithm put us together,” he says.

Fernando started as a biology intern at the FWS for six months, and later he served as a GIS intern for another half year. As a biologist intern, he would make videos in both English and Spanish to increase awareness about conservation and the importance of protecting endangered species such as the Monarch butterfly. As a GIS intern, Fernando also explored natural refuge areas such as the Guadalupe Nipomo Dunes, and worked on trail mapping for that zone.

Working in the field as a geographer makes Fernando happy, because doing so brings back memories from his childhood. Every December, he used to visit his grandpa’s ranch in Nayarit, Mexico. He enjoyed being in the bush, in “‘el monte’ with the caws,” he says. As a son of a rural family, he developed a connection with his traditions and nature that wants to preserve. “I have always been taught that the land is not the inheritance of grandparents, but a loan given by children. I continue to apply this in my work," he says.

One of the things that most concerns Fernando is the exponential growth of development that has reduced the biodiversity in the southern and central coast of California.

“It is alarming. If you compare data from 2005 to that of 2022, you can see a sharp change: hills that have been completely converted into suburbs,” says Fernando.

Despite this worrisome outlook, he likes to see his job as a chance to make a butterfly effect.

"I hope that my job can somehow have an effect in protecting nature.”

Hispanic Access is inspiring, training, and working with leaders like Fernando Lara, who have a stake in their community and have the drive for positive change. To help support and continue this work, please consider making a Charitable Donation