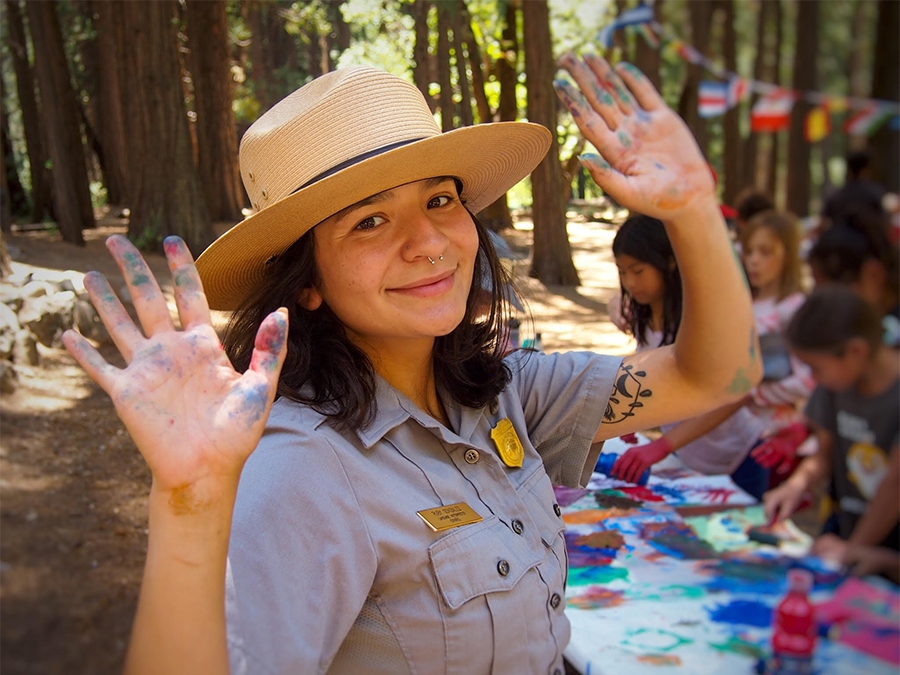 Ruby Gonzalez: Advocating for Latino Representation in the Workforce

How would you describe a National Park Service ranger? Perhaps as someone with a few scratches, without digital social networks, or as someone who loves to escape alone from time to time to go camping in the middle of the forest, like the protagonist of one of those survival TV shows? Well, Ruby Gonzalez, a MANO Project alum, has been a ranger of some of the most astonishing wilderness areas, such as Yosemite National Park, Muir Woods National Monument and now the Sequoia National Forest, doesn’t meet any of these descriptions.

Ruby loves being outdoors but also enjoys the cities and staying in a hotel instead of camping when she can. She loves fashion, but also advocates for the environmental rights of the Latino population. Not conforming to the stereotypes of what a ranger should or should not be has not stopped her from continuing to trust her instincts and to seek ways to protect nature with equity and justice.

After being a MANO intern for a year for the US Forest Service and the National Park Service, Ruby was recently named as the River Manager of the Sequoia National Forest, Now her job is to protect the Kern River, one of the wildest whitewater rivers in North America.

“I analyze the feasibility of any improvement or project addressed to the river. On the other side, on the ground: I have to talk with campers about public education and look also for partnerships, people that want to work with me,” says Ruby, who is the only one dedicated 100% to the Kern River in the U.S. Forest Service.

She has a Bachelor’s in Science in Environmental Studies from California State University, Long Beach and focused her studies on the biological and ecological components of Environmental Science. As a River Manager and environmental professional, one of the issues that concerns her the most in the Sequoia National Forest is capacity control.

With the arrival of COVID-19, visits of the forest increased exponentially. This would have been seen as a positive result were it not for the lack of environmental education among visitors.

“We are left with a lot of trash, pollution, almost like a disregard for the outdoors, and I’m trying to bridge that gap.”

But reducing the lack of environmental education requires diverse and inclusive programs. To solve that, Ruby has had the role of building relationships with Spanish speaking communities.

Beyond her efforts though, she knows the problem is larger and that there is a lack of representation for Black, Indigenous, Latino, and other people of color in federal environmental positions, which prevents bilingual programs.

“As a Latina, I think it’s important for people like me to have access to environmental education and those federal positions. The opportunities exist, but many Latinos don't know it yet. Even I didn’t know either, but it was the Latino community itself that showed me the possibility of accessing this position."

Ruby is a first-generation Latina who grew up in Long Beach. Those two factors - being born to Mexican immigrant parents and growing up in a port that faced major air quality problems - made her aware of the disparities of the environmental effects between low income and the wealthier neighborhoods.

Since she was in college, Ruby began working for nonprofits such as the California Conference for Equality and Justice and Orange County Environmental Justice, where she specifically assessed water quality differences in various areas of the city. That knowledge led her to focus her career on including underrepresented populations in climate change discussions.

Continuing to defend and uplift Latino representation in environmental issues remains her goal for the future.

“I see myself in the Federal service as a forest supervisor or a national park supervisor and I want to enact those changes that I want to see in the agency such as more diversity in hiring."

Hispanic Access is inspiring, training, and working with leaders like Ruby Gonzalez, who have a stake in their community and have the drive for positive change. To help support and continue this work, please consider making a Charitable Donation